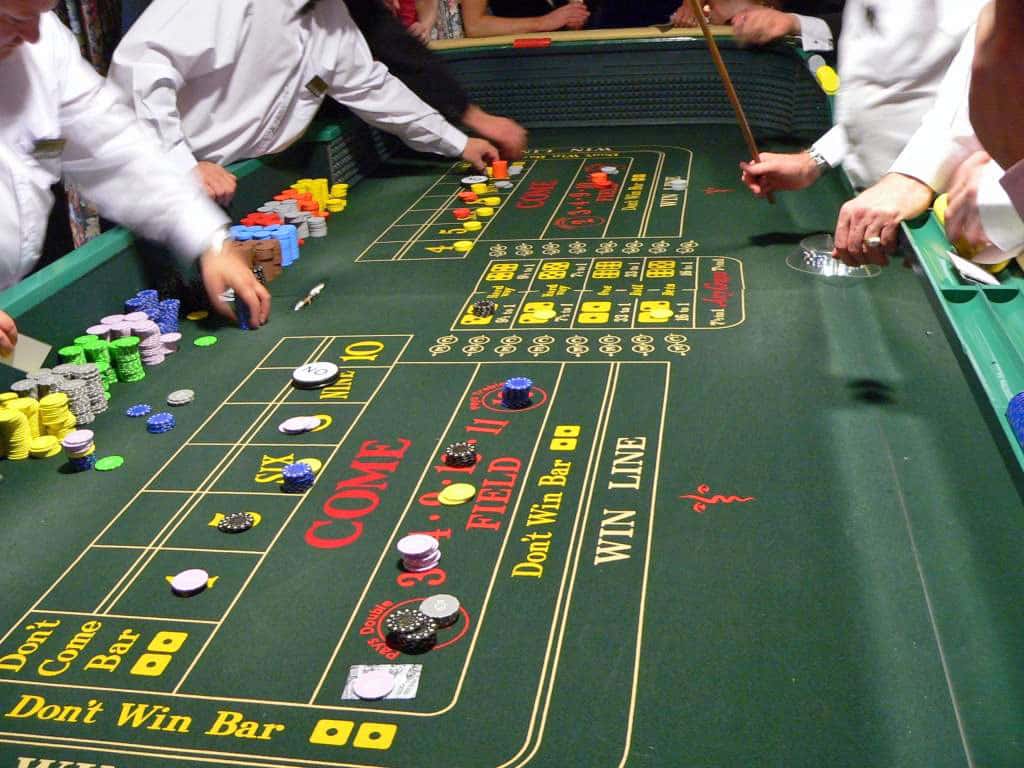 F ew things make you feel as lousy as when you’re playing the Pass Line at a cold craps table.  The distribution variance has turned against you and nothing goes your way as you lose every bet you make.  You begin thinking that the casino made some kind of deal with the devil to make the dice land every which way except your way. 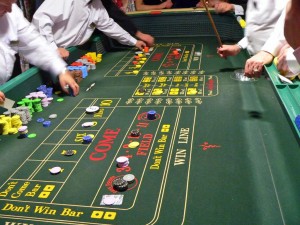 On the contrary, the universe isn’t against you and the devil isn’t influencing the dice.  A cold table is simply a streak that just so happens not to coincide with your particular betting pattern.  There are no hot streaks or cold streaks in craps.  However, there are times when the distribution variance has a hiccup, which is expected, and outcomes tend to fall outside the expected range (refer to our other lesson on distribution variance).  Depending on your betting pattern (e.g., whether you bet the Pass Line or the Don’t Pass), those brief temporary times can be considered hot streaks or cold streaks–again, depending on your perspective.  For example, if you’re a Pass Line bettor, a variance that causes a 7-out 10 times in a row is a cold streak from your perspective.  However, that same exact variance is a hot streak from the Don’t Pass bettor’s perspective.  Again, there are no hot and cold streaks.  There are only variances that go one way or the other, and the way you bet during those variances determines whether you consider them hot or cold streaks.

Generally, a “cold streak” or “cold table” in craps means that the outcomes are temporarily producing more 7-outs than are expected.  Recognizing a cold craps table is easy.  It’s usually almost empty with only a few players who look bored or mad and are quiet as a graveyard.  Nothing a player does results in a win.  Stubbornly standing and struggling with a cold table generally results in you losing your buy-in and walking away mad or disgusted.

🤑 Sun Palace Casino 🤑 is for almost anyone from anywhere in the world! In business since 2002. Great Customer support and works great on all devices. I personally use my iPhone.

You ask, “Why do people stubbornly struggle with a cold table by continuing to bet the Pass Line until their chip rack is empty?”  I have no idea.  The only reason I can think of is that maybe it’s a combination of ignorance and greed.  Maybe they’re so desperate to make an easy buck that they don’t think straight.  I don’t know.  They remind me of a big male gorilla in the jungle that beats his chest to show dominance and strength.  When people stand and fight the table, it’s like they’re beating their chests trying to show the casino whose boss and that they can dominate the casino.  Honestly, that’s the picture I get in my mind when I see people stubbornly fight a cold table.  At least some people have enough sense to leave the table before losing all their money.  But why fight or leave?  Why not just adapt to the circumstances?  Why not switch gears to play the cold table to their advantage?

This lesson isn‘t about the theory of statistics, so let’s just accept the fact that the distribution variance causes what we call hot and cold streaks.  Remember, a temporary variance out of what’s expected one way or the other can be called hot or cold based on how we bet (e.g., a lot of 7-outs is a cold streak for the Pass Line bettor, but it’s a hot streak for the Don’t Pass bettor).  What we need to do is learn to recognize those variances and adapt to them.  In other words, don’t be stuck on playing the Pass Line.  Don’t be so stubborn in your beliefs that you think, “I hate the Don’t Pass, I refuse to bet it because I don’t want to be a negative person.”  I’ve actually heard people say to other players that they won’t bet the Don’t Pass because they don’t want to be negative.  That’s just plain stupid.

Why continue fighting the obvious cold trend and continue losing?  There are three basic options you can choose:

You ask, “How do I win at a cold table?”  It’s simple.  Instead of betting against the 7 (as you do with the Pass Line), bet with it using the Don’t Pass.  You think, “With my luck, the cold streak will be over when I decide to switch to the Don’t Pass, so then I’ll lose on the Don’t Pass just like I lost on the Pass Line.”  Yes, that situation can occur and likely will at times.  So, let’s adjust our thinking such that we won’t try to beat the craps out of the casino during a cold streak.  Instead, let’s just get through the cold streak without losing.  Let’s try to break even, weather the storm, and then when the cold streak is over, we’ll switch back to the Pass Line and defeat the casino when the variance turns in the other direction.  Remember, you’re a solid rock.  Don’t try to break the casino’s back all at once.  Take your time, stalk your prey, and then pounce when the circumstances are in your favor.  During the cold streak, the table isn’t in your favor, so your goal is to ride it out.  Let the other suckers at the table lose all their money to pay for the casino’s new theater showroom.

If you’re uncomfortable switching gears to play a cold table, you can stand and fight using the Pass Line or leave and find another table.  It’s your choice.  If you stand and fight sticking with the Pass Line, you must freely accept your losses if the cold streak depletes your chip stack.

Here’s my method that has demonstrated time and again to be my best weapon against a cold table.

When the table is ice cold, you definitely know it.  Shooter after shooter rolls a 7-out within two or three rolls of establishing a point.  The challenge is to know when the cold streak starts to melt.  An indication that thawing has started is when a shooter makes a couple of points, or several shooters roll lots of numbers before a 7-out.  It’s simply a gut feeling.  You’ll guess wrong as often as you guess right.  But you can afford to guess wrong a few times because of all the money you won with the Don’t Pass on all those 7-outs while the table was still bitter cold.  Remember, your goal is to ride out the cold streak, not make money off it (but if you do, then that’s icing on the cake).  You’ll eventually feel comfortable that the distribution has corrected itself, at which time you can then switch gears back to making Pass Line and Place bets.

You think, “If the Don’t Pass is the best bet on the craps table, why shouldn’t I play it all the time?”  Excellent question!  You can.  With its low house advantage, you’re wise to play the Don’t Pass all the time.  But you sacrifice one important variable in the overall gambling equation–fun and excitement.  Don’t forget that your four-day Vegas vacation is focused on having fun gambling.  If you don’t maximize your fun, you may not get everything that you intended to get from your vacation.

Playing only the Don’t Pass gets boring quickly.  By far, most players play the Pass Line and, therefore, alienate the Don’t Pass player.  While everyone else cheers, laughs, talks, jokes, and high-fives, you stand there leaning on the rail alone.  If that’s what you look for in a vacation, then by all means, play the Don’t Pass.

Ice cold tables are about as frequent as hot tables, so you won’t play the Don’t Pass very often.  Most of the time, the table is “choppy,” which means it goes back and forth from making the point to a 7-out.  It’s supposed to be choppy.  Remember, when playing the Pass Line or Don’t Pass, it’s almost an even-money game (i.e., the house advantage is less than 1% for both bets).  So, just like flipping a coin, you should expect to win and then lose and then win, lose, win, lose, etc.   With a choppy table, you see short-lived lukewarm streaks and cool streaks.  Playing the Pass Line with Place bets allows you to continually experience the full range of emotions.  One game, you’ll lose immediately and wonder why you waste your money.  The next game, the shooter rolls lots of numbers that allows you to press your Place bets and replenish your chip stack.  You continually cuss and moan with your playing partners one minute, and then cheer and laugh the next.  It’s that full range of emotion that makes the game so much fun.  The low emotions when you lose make the high emotions when you win so sweet and exciting.  As explained in one of our other lessons, you defeat the casino by taking advantage of the occasional hot streaks and minimizing your losses during the occasional cold streaks.

When you adapt to a cold streak, playing the Don’t Pass can have its share of fun, too.  It feels good to win the Don’t Pass six times in a row because shooter after shooter rolls a 7-out.  It feels good to know you’re a rock, to know you have the sense to adapt, to know you can win when everyone else insists on fighting a losing battle.  You get some kind of perverted pleasure out of watching everyone at the table look at you in disgust because you switched to the winning Dark Side while they stubbornly continue beating their chests and losing.  Then, when the cold streak is over, you switch back to the Pass Line and everyone is magically your friend again. While here, check out some best rated rtg casino such as Sun Palace, Casino Max, or Slots Plus to play craps for money. We also have a bonus guide and some Craps FAQ.

Here are a few links to internal pages about how to play craps:

You can now head over to the table of contents to find more great content.

Written by John Nelsen in partnership with the team of craps pros at Crapspit.org
Share3
Tweet
Pin
3 Shares

Explore them all. Links will load in a new window

. For some reason whenever i come back to them i  have nice winning streaks. Wishing you the same.