The Craps Table and Its Primary Elements

A nyone who’s strolled through a full-service casino has likely seen the big tables where craps is played.  In this article, we’ll not only learn about the table itself, but also the miscellaneous equipment used on a table. 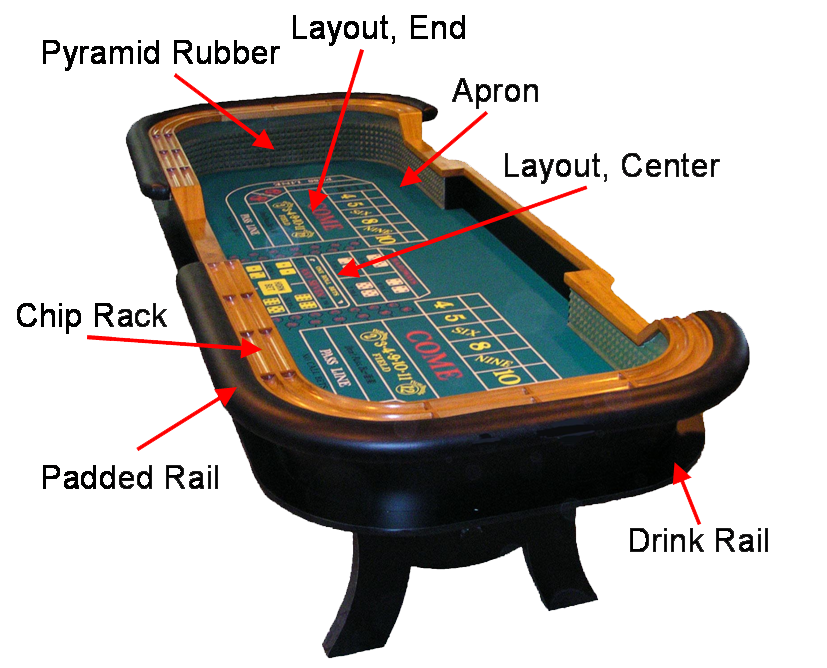 The largest component of a craps table is obviously the “bed.”  Standard casino craps tables (i.e., not the oddly shaped or much smaller specialty tables) are typically 8, 10, or 12 feet long.  Most casinos use the long 12-foot tables to accommodate the maximum number of players.  Each end of a 12-foot table can hold up to eight players; therefore, the casino can have as many as 16 people playing at a time. Keep reading to learn more of if you just want to play free craps click here.

The “padded railing” or “rail” runs along the top edge of the bed.  It’s padded so you can lean on it after standing for long periods of time.  Even if you’re winning, you can get tired after several hours, so the padded rail gives you a place to rest.  The padding is usually thick and comfortable because the casino doesn’t want you leaving the table simply because you’re tired.

The “chip rack” is next to the railing and is typically made of wood with two racks per player (front and rear racks).  The racks are separated into sections by dividers so each player has his own rack.

The “Drink Rail” is a convenient shelf that goes around the perimeter below the padded rail.  Place your drink and cigarette on this shelf so they don’t spill or drop onto the bed.  The casino does not permit bottles, glasses, ash trays, and cigarettes on the railing at any time.  If you make a mess on the tabletop, the cost for cleaning it comes out of the casino’s pocket.  Sometimes, the entire felt has to be replaced.  But those costs are small compared to the casino’s lost profit from having to stop the game to clean your mess.  If you want to show the crew how considerate you are of their obsession to keep the bed clean, when you take a sip of your drink or drag on your cigarette, first take a small step back from the table and then take your swig or drag.  By stepping back a bit, you greatly reduce the risk of spillage or droppings onto the bed.  Avoid the potential for making a mess by never holding your drink or cigarette over the bed.

By visiting CrapsPit, I hope you learn how to play craps, by studying the Craps Rules before you venture off to Play Craps Online. Here we also offer a free craps game, great to practice placing bets.

The “craps table layout” or “layout” is stenciled on the bed and shows all the various types of bets.  The layout is divided into two sections, a center section and an end section that’s identical at both ends of the table.  We’ll learn about the layout in another article.  Players at both ends share the center-section layout.  Because the two end-section layouts are identical, you only care about the end-section at your end of the table (i.e., don’t worry about the other end of the table).  The felt color is usually green, but the casino can make it whatever color they want to complement their décor.  Other familiar colors are brown, blue, and an occasional purple or red.  The casino’s logo or other designs are sometimes stenciled onto the table to customize the look.  The “apron” is the blank area along the perimeter of each end-section of the layout.

“Rail rubber” is built into the wall at each end of the table.  The top 2 or more inches of the rail rubber is flat, and the remaining eight inches have little rubber spikes, called “pyramids.”  All those little spikes are designed to make the dice bounce completely randomly.  One of the casino’s strictest rules for tossing the dice is that the dice must make contact with the wall at the opposite end of the table.  This ensures at least one of dice hits the little rubber spikes to prevent anyone from influencing how the dice land (known as “dice control” or “dice setting”).  Regardless of whether a player thinks he’s perfected some wacky dice-control technique, the fact is that the little rubber spikes ensure the dice bounce randomly, thereby effectively rendering the shooter’s silly dice-control routine utterly useless.  We’ll learn more about dice control in another article.

A mirror about 8 inches wide usually lines the table bed on the opposite side of the boxman and dealers.  It runs the entire distance of the table bed.  It lets the table crew and pit boss see the player’s palm when tossing the dice.  The crew can see if the shooter is trying to cheat by “palming” dice, which is a technique used to bring illegal dice onto the table.

A “money slot” is cut all the way through the bed and is usually located just to the right of where the boxman sits.  (We’ll learn about the table crew and their names in another article.)  The slot leads to a cash “drop box” or “cash box” that’s affixed to the underside of the bed.  The money slot is approximately a half inch by 3 inches, which is the ideal dimension for the boxman to shove dollar bills into the cash box with the plastic “paddle.”  The boxman is the one crew member who pushes the cash down into the cash box, and that’s why his title is “boxman.”

The stickman uses a little dish, called a “dice bowl” or “dice boat,” that sits on the bed against the side wall where the stickman stands.  The dice bowl is simply a utensil to hold the unused dice that aren’t in play.  At the start of a craps game, the stickman empties the dice bowl so all the dice (typically 6 or sometimes as many as 8) are in a pile on the tabletop, and then she uses her stick, which is sometimes also called a “whip” or a “mop” to push all the dice to the new shooter.  The new shooter then chooses two, at which time the stickman uses her whip to pull back the unused dice and places them in the bowl.

The crew uses little quarter-sized buttons with the word “OFF” on one side and “ON” on the other side to identify to the cameras and crew whether a player’s bets are working for subsequent rolls (i.e., “on” of “off”).  Some buttons have the word “BUY” on one side and “LAY” on the other side to identify a player’s bet as a “Lay” bet or a “Buy” bet.  The puck is white with black letters for the ON side, and black with white letters for the OFF side.  If a new game has not yet started or a point has not yet been established, the dealer sets the puck on the bed with the “OFF” side facing up.  After a point has been established, the dealer turns the puck over so the “ON” side faces up and then places it in the proper position on the layout to identify the point number for that game.  We’ll learn about the “point” and basic game play in another article.

If you are looking for a craps table for sale you can find them online. I know i have seen them last i was looking for one. Another option, that is more involved would be to build your own table.

You can now head over to the table of contents to find more great content. Practice at Sun Palace, Casino Max, or Slots Plus to later play craps for real money. Here you will learn how to play craps, find the best craps strategy and also how to win at craps