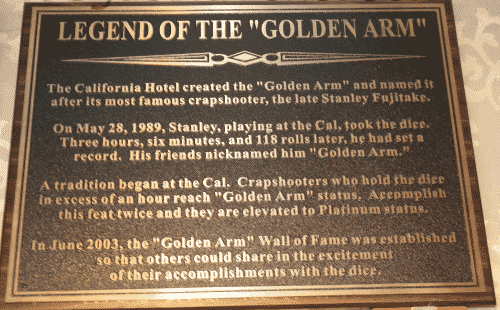 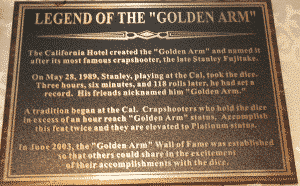 The Crapspit read a recent online article published on multiple news media sites about dice controllers called “Golden Arms,” a name coined by the California Hotel and Casino given to craps players who hold the dice for more than an hour before losing. We found it interesting because the article seems to start by supporting the notion of dice control, but then cleverly rejects it at the end of the article by supporting the fact that craps is a game of numbers, a game of statistics, a game of math.

The article identifies several Golden Arms and their accomplishments, focusing on one in particular (Richard Favela) who, as the article indicates, is a 4-time Golden Arm. (video here) The article states that this player’s longest roll was in 2010. The article also includes the player’s stated objectives when rolling dice, which are to “roll them the same way and hit the same spot on the table the same way.” Richard Favela believes his dice throwing skill can affect the outcome of his rolls enough to change the house advantage to his advantage. In other words, he’s a student of dice control. If you’ve read our other article on dice control, you know what the Crapspit thinks of it, so we won’t repeat it here (see our other article for details). It’s interesting that this player obviously has been playing craps using dice control for at least 17 years (since he claims his longest roll was in 2010). Who knows how long he played before his 2010 long roll, but let’s use 2010 as a starting point. He’s a 4-time Golden Arm, which means he’s had an hour-long roll an average of every 4.25 years. If such a dice-throwing skill exists, wouldn’t you think these craps captains and dice doctors would have a better batting average. I mean, really? Once every 4.25 years?

An hour-long run happens more frequently than you might think, especially on a crowded hot table where there seems to be an eternity between rolls because of all the bets and payouts being made and other interruptions. The key point is that hot rolls occur at random with random shooters. Sometimes, they occur with a player who’s never heard of “dice control” and simply reaches down, picks up the dice, and tosses them without thinking of controlling them. Does this totally random shooter also receive the title “Golden Arm” and get to wear the coveted blue jacket? Even the dumbest dice-control nitwit gets lucky once in a while and has a hot roll, but the key is that their hot rolls have nothing whatsoever to do with any ability to control the dice. It’s sad that these occasional hot rolls are enough to convince the desperate and weak-minded hopefuls that dice control is legitimate.

The article ends with another of the player’s star experiences at the table. The Golden Arm goes through his meticulous routine of setting the dice with the perfect grip and fingertip pressure, and then tosses them with the perfect release. The dice hit the table and bounce off the pyramid rubber. The other players are breathless as they wait in anticipation for a winning number to appear. They think, “This shooter obviously knows what he’s doing after taking so much time to get the dice just right in his hand.” The stickman shouts, “Seven out!” Loser. The so-called Golden Arm then says (paraphrased) with a stunned look, “I don’t know what that was, I don’t know what just happened.” Any craps player who truly understands the game and isn’t hopped up on hope and desperation to the point of losing their mind (or who isn’t too stupid to know better) knows exactly what just happened. The craps player who plays with a level head knows dice control is a scam.

The article then explains how casinos rely on occasional hot shooters to increase their business. Casinos view the winnings paid out from those occasional hot rolls as a loan. They know that those few big payouts are what entice people to return to the tables. Casinos believe in the math of the game; they don’t believe in dice control. Otherwise, do you sincerely believe the casinos would let such skilled shooters play on their tables? Of course they wouldn’t. The casinos know it’s a scam, so if they know it’s a scam, then you should, too. Remember, play smart, play solid, be a rock. Check out some safe online casinos such as Sunpalace, Casino Max, or slotsplus.

If you play knowing it’s a game of math, your attitude and wallet will be better off. Good luck, and have fun at the tables!

Here is an interesting video for all you dice control fans out on the web,