Table Position Can Make or Break Your Playing Experience

W hile strolling the casino floor, you see the craps pit ahead with several active tables.  You decide to finally conquer your fear of the game and try it.  You approach the table but stop a few steps short.  You’ve never done this before so you wonder which position to take and whether one spot is better than another.  Your spot at the table is entirely a personal preference.  Sometimes the table is crowded and you don’t have a choice.  If you want in the game, then you have to suck it up and squeeze in between the fat drunk and the obnoxious jerk.

If the table isn’t full, do a quick survey of the other players and pick the spot where you’ll be comfortable.  Is there a gorgeous guy or gal playing alone?  Where are the smokers?  Who looks like fun versus who looks bored?  Is anyone drunk or being too loud?  It’s entirely up to you and your preferences.  The people on either side of you can influence your mood and your entire experience at the table. 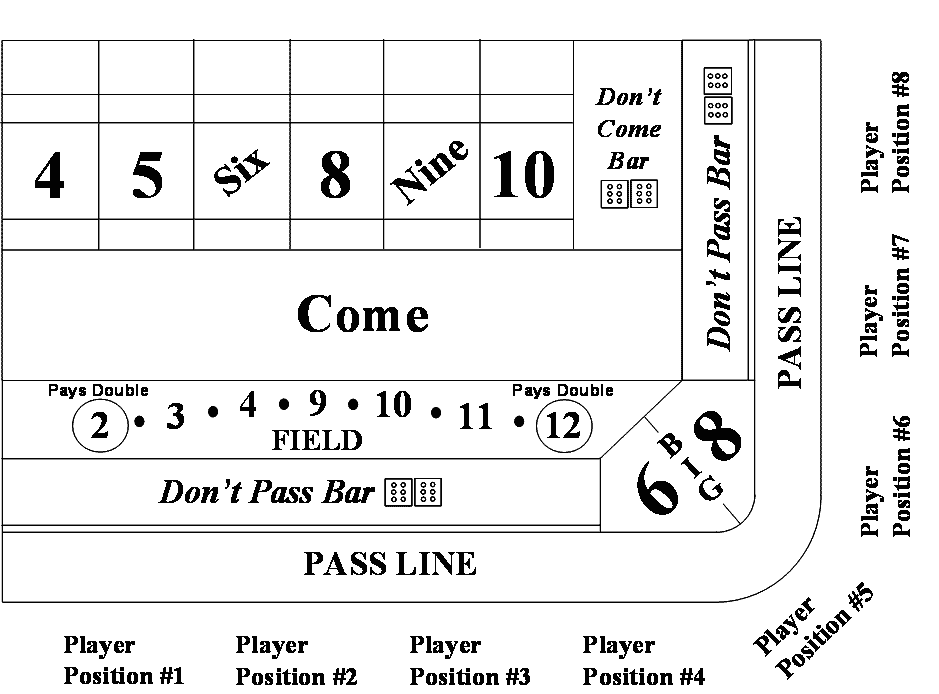 I’ve always preferred playing on the end next to the dealer (i.e., player position #8).  (Refer to the figure for player position numbers.  We learn in another article how the dealers use player positions to determine where to place their bets on the layout without losing track of which chips are whose.)  On the end, I have a player only on one side of me.  When choosing a table position, my only concern is avoiding a discourteous smoker.  I can tolerate a smoker who has the decency to step back away from the table to take a drag on his cigarette and then turn his head to blow the smoke away from the other players.  But I really dislike the smoker who doesn’t show that courtesy.  By standing on the end next to the dealer (or on the other end in player position #1 by the stickman), my chances of getting stuck with a jerk next to me is cut in half.  Although being next to the stickman has that advantage, I avoid that position because I always seem to get in the way of him and his stick.  I remember once he accidentally whacked me on the head with it.  He and the rest of the crew apologized, which I appreciated, but the apologies didn’t make the sting feel any better.  At least the pit boss offered a dinner comp for my wife and me (yes, I took it, of course!).

If you get stuck in a position by players you don’t like, don’t worry, another spot will open up soon (unless there’s a hot roll, in which case you won’t care how much a jerk the guy next to you is).  Watch for a player coloring in and tell the dealer you’d like to move into that spot when she leaves.  The dealer won’t allow a new player to quickly step into her place.  If a new player tries to sneak in, the dealer will politely ask the new player to move to the spot that you vacate.

I remember a time that fits the subject of this article perfectly.  It shows how the players around you can add so much fun to this great game.  My brother and I were in Vegas and we went to our favorite casino for craps.  (Our wives let us go alone together on condition that they could go shopping at the Mall of America in Bloomington, Minnesota.)  The casino had an unusual sit-down table that could accommodate six players with only a $3 minimum bet.  (I was terribly disappointed when they eventually replaced that table with Blackjack tables to make more profit.)  We arrived at the casino at about 9:00am, hoping for empty seats at the sit‑down table.  No luck.  Just as we asked each other if we wanted to go somewhere else, two guys put their chips down to color in.  (“Coloring in” is when a player exchanges small-denomination chips for larger ones, usually when he wants to leave the table.)  My brother and I took their seats, bought some chips, and made our $3 Pass Line bets.

Two young ladies, about 30, sat to the left of us.  Three of their friends stood directly behind them watching.  From their deep Southern drawl, I figured they were from L.A. (Lower Alabama).  It was only 9:00am, but they each held some kind of liquor drink.

My brother said, “You girls are starting kind of early this morning.”

“Honey, we’ve been drinking all night long,” the noisiest one said.  (I could barely understand her slurred accent.)

Neither of them had a clue how to play the game.  They made the minimum $3 bets and were simply having fun.  They relied on the dealer to tell them what to do, how much to bet, where to put their chips, and when to pick up their winnings.  The dealer was wonderful–funny, helpful, friendly, and patient.

The noisy one did most of the talking, and laughing.  That laugh, I’ll never forget it.  It was a low, bellowing, “Bwaahahaha!”  Each time she won a red $5 chip, she laughed, “That’s going in the vault.  Bwaahahaha!”  Then, she stuffed it into her bra, took another sip of liquor, and asked the dealer, “How much do I bet now?”

The noisy girl broke out into another “Bwaahahaha,” after half choking on her drink.  She looked at the $5 winner and said, “What are you jumping up and down all excited for?”  She pulled a $5 chip from her bra, held it up, and turned to her friends, “He won five dollars and he’s jumping like a fool.  That’s cigarette money.  Bwaahahaha!  He got money. Bwaahahaha!”

Everyone at the table cracked up, including the dealer.  Even the guy she made fun of laughed.  Just the way she said “money” in that deep, drunken Southern accent was hysterical, “muh-nee.”

I was literally in tears.

“What do I bet now?” she asked the dealer while sipping her drink.

I hadn’t laughed that hard in quite a while.

So, the moral of this story is, people at the table can make or break your playing experience.  Choose your spot wisely.

You can now head over to the table of contents to find more great content. Practice at Sun Palace, Casino Max, or Slots Plus to later play craps for real money. Here you will learn how to play craps, find the best craps strategy and also how to win at craps

Written by John Nelsen in partnership with the team of craps pros at crapspit.org.
Share1
Tweet
Pin1
2 Shares